Vukašin Radulović: From scepticism about informatics to the digital transformation of healthcare 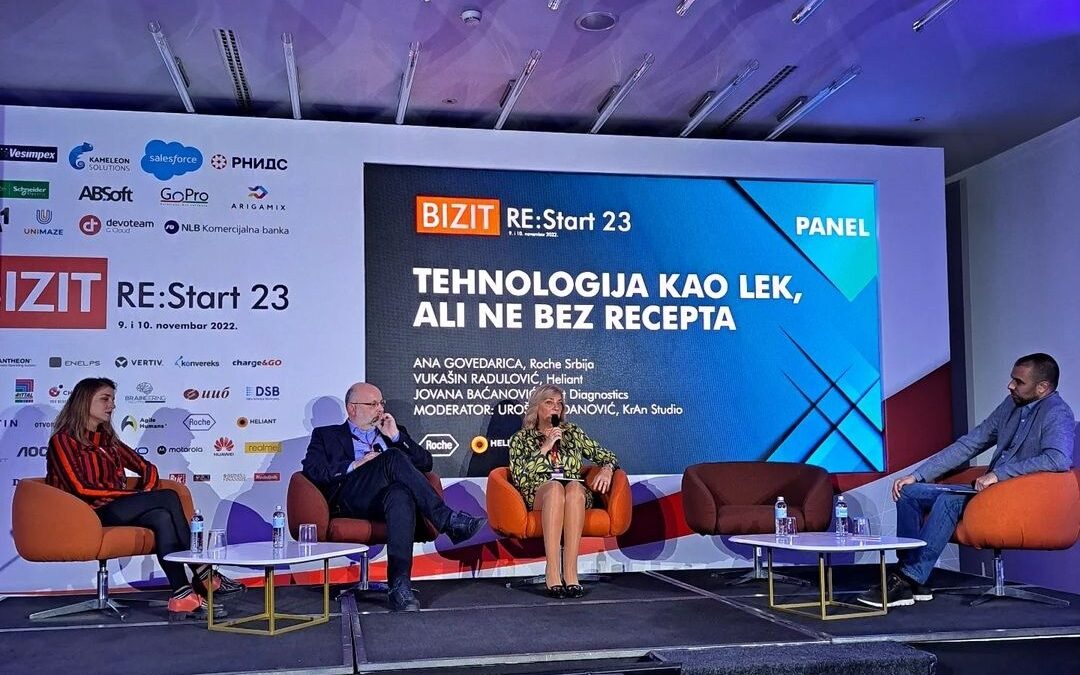 The Heliant representative, Vukašin Radulović, was one of the speakers at the ninth BIZIT conference RE:Start 23, a respected regional business and information gathering, held in the Belgrade Crown Plaza Hotel in the previous two days.

“It is not easy to implement software in any industry, just as it is not easy to go through the digital transformation path that we have been going through for the past 20 years. When we started down this path, I had the impression that the majority of healthcare professionals, doctors, and pharmacists experienced informatics as a miracle that would disappear quickly, but the convergence of medicine and IT has been going exponentially in recent years.

From the scepticism that informatics will come and go, we have come to the point that today we are talking about digitization of everything – digital transformation of healthcare facilities, treatment processes and technological methods that would not be possible if it were not for the combination of our two professions.

It is not easy to get used to any new technology, it takes time. Nor can we expect health professionals to change their routines easily. But the fact is that times are changing and the medicine of authority is now turning into the medicine of data, and we must work on that together,” said the Heliant representative.

Radulović notes that just one sequenced genome has terabytes and terabytes of data, and that today data science is something that connects electrical engineering and all software faculties with medical and pharmaceutical faculties.

“It is something that is being worked on now and will be worked on in the future,” Radulović pointed out.

Bogdanović notes that some of the big steps in medicine were made after the Second World War or during the corona virus pandemic, so he wanted to know what the next step was that would lead the company “Heliant” to do something new and epochal?

Vukašin Radulović says that “that big step is, in fact, a sum of small steps that we take every day”.

“We are pushing towards the medicine of real data, data in real time, what is called real world evidence. Key global events, such as, unfortunately, the pandemic, which brought a lot of evil, initiated certain processes.

At 17:15 that day, the Infectious Diseases Clinic started doing that. Why haven’t we done this in the last six months? There are many reasons, all of them are wrong. But then we managed to do it in 12 hours and push the whole thing forward”, said Vukašin Radulović.

He said that some incredible things had been done in Serbia today, at the European level, that access to European funds was being gained owing to the fact that our hospitals and the professionals had shown what they could do.

The company “Heliant”, says Radulović, worked with the company “Roche” on several projects, registers that were evaluated with the highest marks and merged with European disease registers, making the data structured, better, smarter.

During the work on the telemedicine project, he emphasized, it was very important to go through the legislative process because everything must be in accordance with the laws, so that data security could be at the highest level.

“When you propose a new method of treatment, let’s say telemedicine, you would expect resistance from the professionals that want to treat people with traditional methods. Here, however, it turned out to be quite opposite. The biggest challenges were the legal aspects, technological in the second place, while doctors were enthusiastic and said – “OK, this is a great way to do telemedicine examinations in areas such as, for example, haematology or gastroenterology.

At the moment, as Radulović says, the company “Heliant” is working on projects that have not only medical and technological importance, but also environmental ones, since it engages in recalculation of the carbon footprint.

“There are still many people who are not aware of how advanced is what we are doing. We must ensure synergy in initiating these processes and show that there are already aware companies, such as ours, which are working hard on this and achieving really excellent results”, says the representative of the company “Heliant”.

This company practically works on the synergy of two professions – in the last year it employed four doctors, two biochemists, says Radulović, emphasizing how much the support of the “white team”, as they call it, means to the “IT people” in the “Heliant” company, and how indispensable and irreplaceable it is.

“There is almost no new process in the Heliant company that someone from that team is not involved in. It represents a change of consciousness for us as well,” says Radulović.

He proudly pointed out that 45 percent of the “Heliant” employees are women, which is quite a high percentage in the world of IT companies. He also said that they participated as a company in the “Girls in IT Day” project.

“Girls might have expected some dull guys working in some basements in machine language, with thick glasses, but instead they found a relaxed, inspiring atmosphere. They did not even expect that IT was not only programming, but much more than that – data science”.

Radulović emphasized once again that the issue of data security in healthcare was more complex than in any other sector. He said that now all chosen physicians in public health could access their patients’ data wherever they were treated at the secondary or tertiary level. If the legislation would allow the private sector to have its own chosen physicians – they would be able to access that system at the same time, said Vukašin Radulović from the company “Heliant”.

Radulović emphasized once again that the issue of data security in healthcare was more complex than in any other sector. He said that now all chosen physicians in public health could access their patients’ data wherever they were treated at the secondary or tertiary level. If the legislation would allow the private sector to have its own chosen physicians – they would be able to access that system at the same time, said Vukašin Radulović from the company “Heliant”.